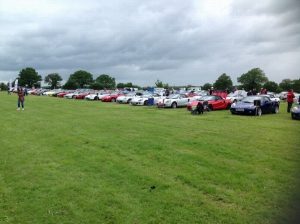 Several of our Anglia region club members made the trip to Hatton Park on Sunday for the annual club meet.  Lots of very special cars were there to be judged or just to be admired.

Jonathan brought his 10th anniversary addition Mr2 so we could all get to look. Think you have a very nice original car, in original paint, it is definitely a lovely car and it’s so good to have another member back behind the wheel of an MR2.

Fun was had at the car gymkhana, Nick and Sharon were going great guns until navigator Sharon – holding the route map upside down – gave the wrong instruction at the last obstacle and Nick couldn’t make up the time, or he was sure he would have won.

Barrie with navigator Joy took on the course with determination, and perhaps a little too much right foot. Unfortunately one of the obstacle cones got caught up in the bodywork, and stewards had to extract the cone, with some of the GT86’s bodywork before they could continue. Thank you Toyota for supplying the car.

Barrie did not show his wonderful MR2 this year, as he thought it was about time to let someone else have a chance, but the car as usual pulled quite an audience. 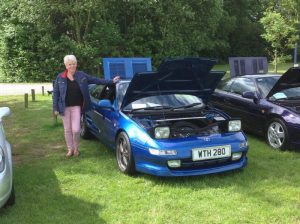 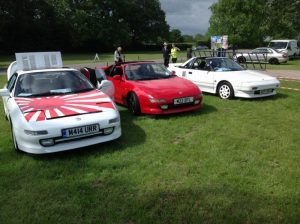 John had a third place in a strong Daily Driver section with his N reg blue Mk2, which pleased him no end.

Jonathan was lucky with the raffle, winning 2 prizes, and John won a new Toyota baseball cap to match the car!

Although the day started bright but breezy, it went downhill as the day wore on. Some stoic individuals (which included us Anglia region hardened campaigners) stayed in the increasing rain to the end. 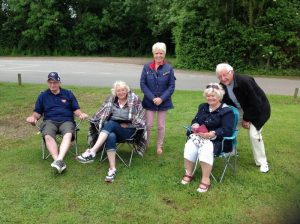