This is the first time the club has attended this show.  Although not as big as the Classic in November, there was still a lot going on and some great cars to look at.  As the show’s title suggests, it’s more focused on being hands-on than just a static display, but as this was our first visit we did just basic polishing and detailing.

The Organisers provided us with a stand big enough for 4 cars: Simon McMurray’s highly detailed red Roadster, Darren Letts’ Mk2 Rev 5, my 10th Anniversary and Leon Howells’ Mk2 Turbo.  Leon’s car was featured in the last issue of logbook but has changed beyond recognition since then. His car was only completed the day before the show and more than one person commented on the smell of fresh paint!  We would have loved to have had a Mk1 on the stand but unfortunately it was not to be although this will be remedied going forward. 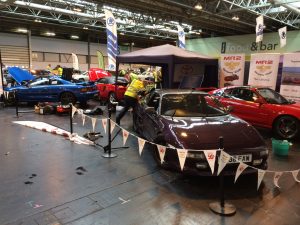 As usual the format was set-up on Thursday, with the show open to the public on Friday, Saturday and Sunday.  We arrived around 10:30 and began the set-up.  Unfortunately on the way to the NEC the heavens opened, so we all had to clean the cars again once the stand was completed.  We all got away for around 6pm.

Friday started with a full English breakfast.  Unfortunately Darren couldn’t join us, as he had to do an 80 mile detour when he realised he had left his MR2 keys at home.  Obviously this wasn’t mentioned or brought up at all for the rest of the show….!

Initially the stand was busy, but by mid-afternoon the crowds in general started to dwindle and by the time the show closed at 5 there were not many visitors left.  We still managed to get a new member and had a visit from Les Fletcher from the South West Region. 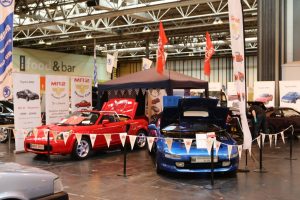 Saturday dawned with the now traditional pre-show full English breakfast to set us all up for the day ahead – and what a day it was!  We had Graham Milligan, Dave Hall, Nik Milford, Pete Russell, Mike Jackson and Ann Campbell visiting us from the North West Region, along with Keith and Elaine Greenwood who popped down from Scotland.

It was a totally different story from the Friday, with people actually queueing up to come and talk to us – something I’ve not seen before, which was great.  We had 3 new members join and a couple of renewals as well – 2 of the 3 new members have 10th Anniversary editions also in Caribbean Blue, so that was good.  By 6pm we were all very tired and losing our voices due to all the talking, but we had had a great day. 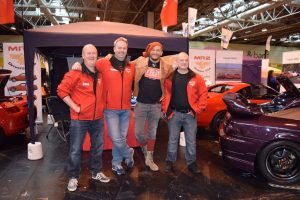 Sunday arrived and we were expecting more of the same.  We were joined on the stand by our wives and partners, which was great.  We also had a celebrity visitor to the stand …….a certain Mr Fuzz Townshend of Car SOS fame.  He was being ushered to the MX5 stand at the time, but he saw the light and decided to come on to a proper Japanese sports car stand first for a photo shoot with us!

As with all of this type of show, the crowds started to dwindle by mid afternoon, which gave us the opportunity to start to strip down the stand earlier than expected.  We were all packed by the time the tannoy announced that we could start our engines in preparation for leaving the hall and we all managed to exit in convoy.

Overall the show was a good one for the Club and we would look to do it again next year.  Obviously it was a learning curve for us and there are things we would do differently.