This is the first time the South Midlands Region has attended this show and it was our Region’s first event of the 2017 season.  11 cars attended: 6 Mk2s and 5 Roadsters.  We arranged to meet in a layby on the A46, just outside Stratford, and once all the passes and rally plaques were handed out we all set off in convoy into Stratford. 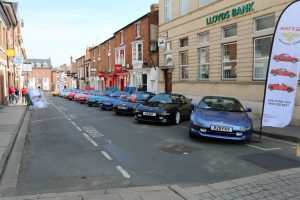 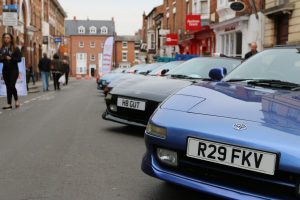 Upon arrival we lined up the cars in marque order and settled back to enjoy the day.  The organisers had given us our own street, so we had plenty of interest in the cars and it seemed we were the only Car Club displaying which again helped to draw the crowds. 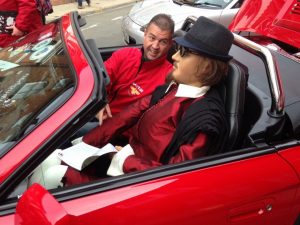 We even had William Shakespeare himself (well, a wax dummy anyway) make an appearance and sit in Simon McMurray’s Roadster, resplendent with a copy of Log Book ….. obviously a classic read!

The event itself is based in closed off roads right in the middle of Stratford so there was loads to see and do not just around 300 classic vehicles ranging from a circa 1940’s fire engine up to brand new Audi R8’s. There were also many local car dealers exhibiting their new cars for those wishing to have a look.

Also being right in the middle of Stratford there were all the usual Shakespeare places to visit such as the Shakespeare Trust and the River Avon and the RSC were only a short walk away. Being in the centre there was also plenty of retail therapy on hand for those who wanted a distraction away from the cars.

It was great to meet up with friends old and new, finally being able to put a face to some of the new members names. So a big thank you to all that attended and hope we continue with the same level of success the rest of the year.