The organisers provided us with a stand big enough for 4 cars.  We had Simon McMurray’s highly detailed red Roadster, Steve Tudor’s 10th Anniversary Mk2 and the Mk1s of Mike Jackson from the North West and Les Fletcher from the South West Regions.

As usual, the format was to set up the stand and the cars on Thursday, with the show open to the public on the Friday, Saturday and Sunday.

We arrived around 9.00am on Thursday and began the set-up.  On arrival, we found to our surprise that the stand had been carpeted!  After a couple of trips to the organisers’ office, they agreed that it was their mistake and as we had been honest and informed them of the mistake they let us have the carpet free of charge, which was great. 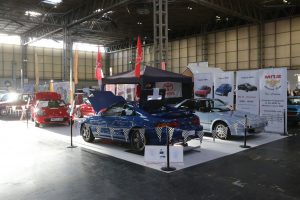 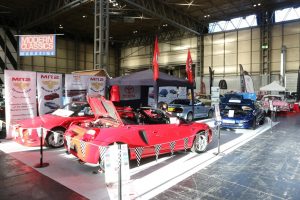 Friday started with the now traditional full English breakfast, followed by setting up the regalia stand as there wasn’t enough room in the MR2s to take everything with us on the Thursday.

On Friday, Simon, Les and Steve were joined by Darren and Fiona Letts.  Fiona was on a mission to secure a celebrity guest for our 2018 National Day – although an agreement couldn’t be reached on the day, good progress was made.  Darren also brought along the laptop and display screen to show videos and photos of what our Club does.

The stand was busy all day, with an amazing amount of interest in the cars and the Club.  By show close at 6.30pm on Friday, we had signed up 5 new members which was a great start to the event.  We also had Practical Classics magazine on the stand signing up Simon’s Roadster for a buying guide feature coming in the near future.

Saturday dawned and what a day it turned out to be!  Simon, Les, Darren and Steve were joined by Michael and his partner ‘Admin Ann’, Pete Arnett and Mark Kenworthy from the South Midlands Region.  Graham and Catherine Milligan from the North West Region also joined us and helped out on the stand for a while.  We were so busy that we really didn’t manage to get off the stand at all to have a look at the actual show!

By 6.30pm on Saturday, we were all very tired and losing our voices due to all the talking, but we had had a great day with the new member tally rising to a total of 17.

Sunday arrived and we were expecting more of the same – we weren’t disappointed!  We were joined on the stand by Simon McMurray’s wife Carol.  As on the previous days, the stand was full most of the time with a steady flow of people interested in the cars and the Club.  By the end of the show at 5.30pm we were all extremely tired, but elated that we had managed to sign up a total of 28 new members and one renewal, which we think is a new Club record!

We also managed to find time to ‘hobnob’ with most of the car show TV celebrities, including Mike Brewer and Ant Anstead from Wheeler Dealers and Fuzz Townshend and Tim Shaw from Car SOS. 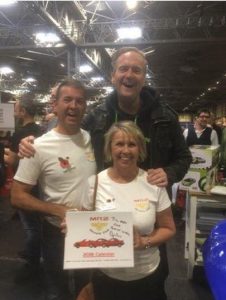 We managed to strip down the stand and exit the NEC by around 6.15pm

Finally I’d like to thank Simon, Les and Michael for bringing their cars to the show and for their company over the four days, Admin Ann for her skills on the stand and all the members who visited us or helped out on the stand as it was great to catch up with you all.