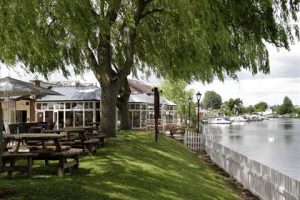 It was a lovely spring day, so the perfect place to have our Sunday lunch was the Riverside at Acton Bridge with its stunning views of the river Weaver with the boats, narrow boats and the ducks for company.  We booked the large conservatory for all of us, as this is a little separate from the restaurant and so we didn’t disturb other people whilst having their lunch – we can be quite noisy when we all get together!  Plenty of discussions took place, mostly but not exclusively about cars. 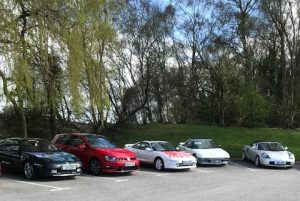 We had good display of cars in the car park: Ian and Viv’s stunning white and silver Mk1, David and Linda’s white Mk2, a new red VW Golf (I’m sure that used to be a Viper Green Scirocco…), Dave and Shirley’s green Mk2, Bob and Glenys’s silver Roadster, Brian’s Mercedes SLK, Jean and Sky’s blue Mk2 and Mike and Ann’s Vauxhall Ampera ….. all parked with the precision of being on an event field, just practising for later in the month!  As the Manchester Marathon was being run a couple of us were delayed but joined a short time later, Sean and Dominic, whose Roadster is still being re-sprayed, and Rob and Janet in ther Kia Sportage.

After we had eaten, as the weather was so fine and sunny, we left the conservatory and took up the tables in the beer garden for another drink – within driving limits of course.