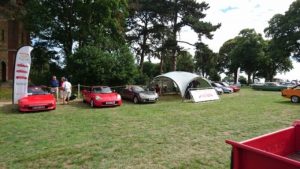 July saw a new venue for the North Midlands Region, as we visited the Château Impney Hill Climb.  Château Impney was built in 1873 by John Corbett in the style of a Louis XIII château, as a present for his wife who was of French/Irish descent.  The first hill climb was held in September 1957 and continued for the next ten years.  It was revived again with a twisting 550 yard course in 2016 as a two day event.

The North Midlands Region attended the 2017 event on the Sunday in good weather.  We were pleased to welcome Marion Cook and Alan Bromwich with their immaculate Mk1 and new member Tim Mason and his son Ben with their ‘Red’ roadster.  There was also a father and son combination from the South Wales Region in the shape of Graeme Notley and son Sam in Sam’s turbo charged Mk2.  Graeme is still refurbishing his supercharged Mk1.  Also in attendance were Bryan Elliott with his Mk1, Ryan and Jen in their Audi (their ‘Red’ roadster had suffered serious engine maladies), Chris and Gerrie Moore in their Mk2 and Steve and I in our ‘Red’ roadster.

The hill climb event was very exciting, with lots of exotic machinery both old and modern.  Older enthusiasts in the Club will remember some of the classic vehicles taking part, which included two Maserati 250Fs of the 1950s Formula 1 scene, an early Chaparral which took part in the CAN-AM series and a rare Birdcage Maserati.  There were also a number of ‘D’ Type Jaguars.  Also taking part was a BRM Formula 1 car which had originally been driven by Jo Bonnier and Graham Hill in the early 60s.  We were able to wander around the paddock and inspect all the vehicles up close.

The surprise of the afternoon was a visit by the Lancaster bomber of the Royal Air Force’s Memorial Flight, which did a few circuits over the course.

It was a very enjoyable day and will certainly figure in the North Midlands calendar for next year. 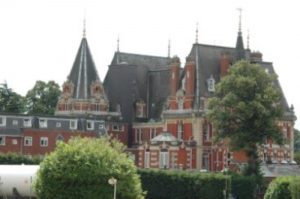 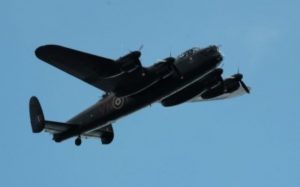 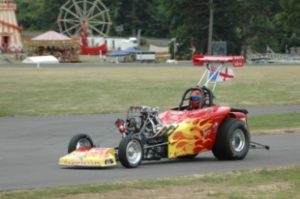 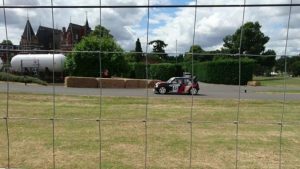