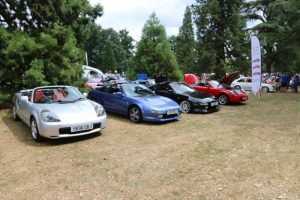 Now in its 26th year, this is a major event that has around 800 classic and sports cars in attendance.  It is held in the grounds of Kimbolton School, near Huntingdon.

We had 6 cars support this event last year and 2017 saw this grow to 13 cars, which is a fantastic turnout for a Region only in its second year.

Four of us met near Junction 1 of the M6 and travelled down the A14 together to meet the other cars at Thrapston Services.  11 cars then travelled the last 10 miles or so in convoy, with 2 more meeting us at the venue.  As was the case last year, we then had great fun actually trying to find our plot.

The pitch itself was again a little disappointing, with us being squashed into a small area around a rather large tree which was nowhere near ideal for us to display the cars properly.  We had originally asked for an area big enough to take 15 cars.  A complaint on behalf of the Club has gone to the organisers, so we shall see what comes of that.  That issue aside though the show is well worth a visit.  It’s a great day out, especially when the weather is as kind as it was this year! 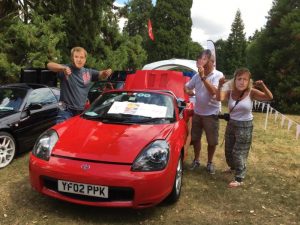 We also had a ‘visit’ from The “Not So Grand” Top Gear Tour crew, who came to look at Simon McMurray’s Roadster that was recently featured in Classic Car Mart….. it appeared that the “Not So Grand” crew were not impressed with Simon’s car following all his hype on Facebook! ha ha  Unfortunately, as with the Practical Classics Show when Simon missed out on the visit of Fuzz Townshend to the Club stand, he also missed out on this!  Much to his relief we think, or it may have had something to do with Carol taking him shopping!

There is also a fly past by the BBMF, which this year was a sole Spitfire, and the Sporting Bears are in attendance offering rides in various sports cars in return for a fee to children’s charities.  There is also a large craft market, for those wishing for a bit of retail therapy.