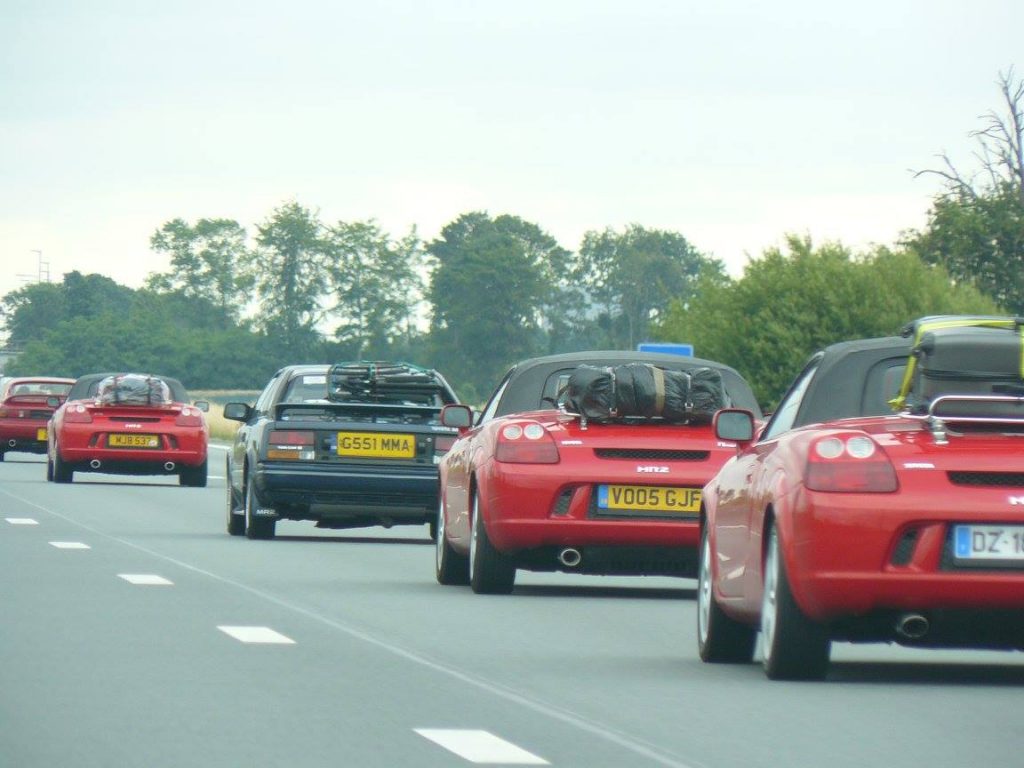 Only being a member of the MR2 Drivers’ Club for around a year, I first found out about the Euro trip from the red Club events flyer, given to me by Richard Pells at my first ever meet with the South East Region at Toyota HQ.  I looked at the trip, although we had missed the 2016 one as my MR2 wasn’t even running at that point and had no engine in it!  In fact, the shell was strapped on the back of a trailer in the car park during the Toyota HQ meet, on its way to our mechanic to fit the engine.  I remember thinking “Will my car ever be reliable enough to get me there?  Hmm, maybe one for the future.”
My second Club meet was a pub lunch near Brands Hatch race circuit and this time I was actually in my running and driving MR2 Roadster.  I met Mark, Sandra, Roger and Marina, who by the end of the lunch I discovered to be Euro trip veterans, clocking up multiple visits over more than 12 years between them!
So as a newcomer to the Club, feeling totally out of my depth, I asked about it to the table… then BOOM, I received a full run-down about how much fun it was seeing beautiful castles, breweries, amazing scenery, great driving and MR2s everywhere!  From that moment I was hooked and decided that I was going.  That night I was emailing John Price to get booked in.  The countdown began.
So the day to leave finally arrived.  I was more excited then a 2 year old on Christmas Day! 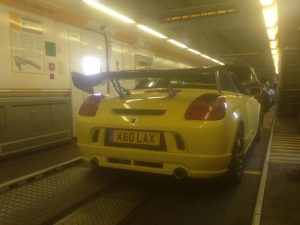 We met everyone at Folkestone to get on an early Eurotunnel crossing, then met up with Jennie and Dave – two other newbies – at a services in Calais.

We all then headed to Recklinghausen, in Germany.

Recklinghausen is in northern Germany and is very much an old industrial region where back in the day their coal mine was the one of the largest in Germany and exported coke and coal all over the world. 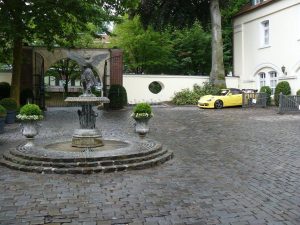 So we arrived at the hotel called Parkhotel Englesburg, with parking just off to the front of it.  We headed to the car park, to find that it was in fact a multi-storey car park with steep ramps.  My Roadster is very low and I could see this going very wrong … which it did.  The car park ramps now have a nice yellow smear of paint on the down slopes – well at least I’ve left my mark to be remembered by!
The hotel  was amazing.  Our huge room overlooked the stunning cobbled walled courtyard, with metal gates and a water fountain.

After settling in to our rooms, we were due to meet as a group for dinner at 7pm for a briefing and run-down of the next few days and to go through convoy rules etc.  As I looked around the room, there were people everywhere!  I just sat there, looking at my boyfriend Chris (my driver for this trip), not knowing what to say or do – we just didn’t know what to expect.

Then everything that I thought in my head was going to happen got thrown out of the window!  Gordon Shepherd, the German organiser, appeared in the doorway waving, then came bouncing in to Scottish bagpipe music in a kilt – yep, a kilt!  I have still never worked out why, but he certainly made a first impression that will be with me forever.
Then he broke the news that there were going to be no castles, no breweries and no vineyards, as they had done that every year for years – this year was going to be different!  Different how, I thought?  I had been promised Disney castles and vineyards.  Oh my …
S 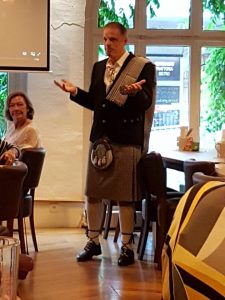 o, on Day 1 the trip included a tour of the coal mine, lunch in the coal mine restaurant and late afternoon was to be a visit to a ship lift.
The weather was appalling, but in high spirits everyone went to the meeting point to head in a convoy of around 35 cars to the disused coal mine.  When we arrived, we worked out that we had somehow lost the middle section of the convoy and they had to meet us there.  Apparently in all the years of Euro trips, this had never happened before – the rear half on several occasions, but never the middle!  It’s still yet to be explained just how we managed it.

The retired coal mine, now the Zollverein Unesco World Heritage Centre, is now a museum.  We had a tour around the grounds, then luckily went inside the museum as we were starting to look like drowned rats.  We went inside in the dry and had a tour of the closed mining process, from collecting raw material to sending it off in trucks for sale.

The second part of the visit was a ship lift.  I didn’t attend this part, due to being soaked through and having no coat, so a few of us headed back to the hotel to change and warm up.  I did hear that the ship lift visit ended on a bus eating cakes and Champagne – somehow the group managed to blag some Champagne from a party, thanks to Bernard!  So everyone sounded happy and had a great end to a soggy day.

Day 2 saw another six cars join us from the Netherlands, which brought the total to 42 cars I think.

We all headed off to a Roman ruin site called LVR – Archaeologischer Park Xanten, or ‘APX’.  We had a lovely tou 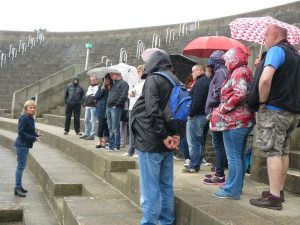 r guide who showed us around the site, but again the weather was against us and it poured down for at least an hour.  After the tour she left us to our own devices, to wander round and closer inspect the things we had seen.  The weather then took a U-turn and out came the sunglasses and sun cream!  It took a while to walk round, as it was a huge site, with a stunning windmill and cathedral which some members went to see.
Lunch was served in the restaurant, with themed clothed waitresses really putting the effort in, so they got a massive thumbs-up for the effort and kindness they showed.

After lunch we had a whole section of the car park reserved for us for a massive photo shoot.  We lined up all the cars in four long rows, which really brought into perspective just how many cars were on the tour – it was amazing to see.  So many MR2s from four different countries, coming together as one Club.  Great effort everyone … even if we did have a token Porsche and Audi in there! 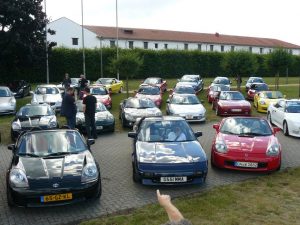 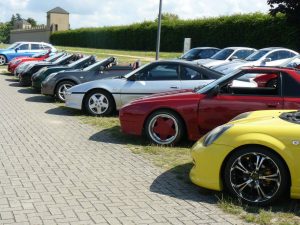 It was then sadly time to say goodbye to my new German and Dutch friends, who were heading back home.

I said goodbye to my favourite car of the trip, a yellow Mk1, and waved with a sad face as he drove off. 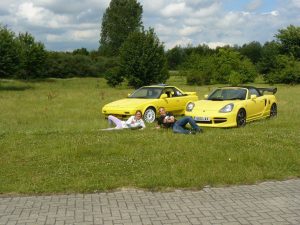 As we were leaving, we decided to go back the ‘quick route’ on the autobahn and asked Gordon about the quickest way.  He pulled out all the stops yet again, pointing us at four cars and saying “Follow this car – it’s very fast” about a lovely silver Mk3 owned by Carmen and driven by partner Jorg.  Let’s just say they didn’t hang around on the unrestricted parts!  We were very keen to follow, as the other three cars quickly vanished behind us and we only just managed to keep up!  Well, we do have a huge spoiler on the back of ours – let me tell you, we’d have had him if we didn’t have the extra drag of the spoiler.  Next year we’ll have him…

As we headed back slowly into Recklinghausen, my exhaust manifold decided it wasn’t happy sounding like an MR2 and instead preferred the VW Beetle tone!  So blending in became an issue – as if being bright yellow wasn’t enough, my Roadster ‘Jasper’ really wanted to be noticed, but now for all the wrong reasons.  Thanks Jasper!  Mark and Sandra Barrett actually compared us to a beach buggy – thanks Mark, I know you love him really.
Monday was a beautiful day, with blue sky and not a cloud in sight.  We were due to leave at midday, although others were staying another night which is definitely something I will do next year.  I regret not taking up the offer, as we missed out on the tour of Recklinghausen.  I’m really sad that we missed it, as the remaining members got to get their hands dirty and go into a miners’ training camp.  We were also very lucky to have a special visitor come to see us all at the hotel after breakfast – the second mayor of Recklinghausen came to give us a huge welcome and said a few words.
As we were heading to Amsterdam for early evening, we said our goodbyes to everyone and headed our separate ways … only to bump into Lynn Gardner and several other members a couple of days later in a restaurant on a day trip to Bruges.  What a small world!
I thoroughly enjoyed Euro 2017 and I’d like to say a massive thanks to: John Price and Gordon Shepherd for organising both ends; all the German guys and gals, especially Gordon for being lead man; Klaus for the convoy assistance; Nickolas for collecting the stragglers bringing up the rear of the convoy.  Also a massive thanks to Bernard, as there were times I was so glad to see the sight of that stunning black Mk3 of his as we had lost sight of the convoy and he would come steaming past to lead the way, or be parked in random places to point the direction we needed to go.  Last of all thank you to the UK group, including Sandra, Mark, Roger, Marina, Tracey and Patrick, who took us under their wings, along with Dave and Jennie who joined from France.  I’m sure I’ve forgotten some people, so I apologise in advance if I have!
Thanks for an amazing trip that I will never forget – Jasper and I will see you all again next year.  Ooops, I forgot to thank my partner and driver Chris, for doing all the mileage so that I could sit, watch and take it all in.  Thank you all.