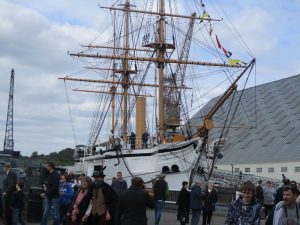 The dockyard at Chatham is a historic naval dockyard on the banks of the river Medway and has been building war ships since the seventeenth century.  The naval dockyard closed in the 1980s and is the now one huge wartime museum.

There is so much to do and see at the dockyard.  They have 3 ships in docks that you can board and explore, including a submarine.  There are the grand sheds that still exist, where the ships were built and launched.  The sheds house an array of naval and military craft, plus a display of RNLI historic life boats.  There are also various buildings on the site that were factories for making ropes, sails, ironmongery etc that went into building the ships and these buildings have been converted into museums so you can see how they made the ships.  It was an absolutely amazing experience. 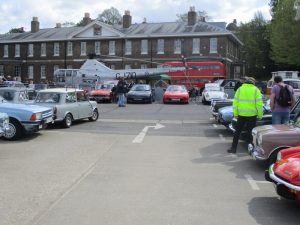 There were all sorts of cars on display in various areas around the dockyard.  The MR2s were located in the helipad area.  ‘Jacko’ from our Club was there in his Ferrari Dino kit car, which is based on a Mk2 MR2.  At the end of the day we felt we had a good day and went home exhausted from exploring the dockyard.  Perhaps well see more there next year.