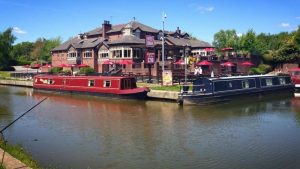 We had a great response from our members for this month’s Sunday Lunch at The Moorings in Boothstown, near Manchester, so much so that the space provided for us for the meeting wasn’t big enough and we spilled out from our designated area into the main restaurant.  This meant that things were a little disjointed, but none the less we all mingled between the many tables.

The motorway was very busy so we all arrived at varying times:  David and Linda, Ian and Viv, Jean and Sky, Glenys and Bob, Brian, Moe and Les, Nik Pete and Cody and Sean and his son, Mike and Ann, Dave and Shirley, Rob and Janet and finally Catherine and myself.

We seem to have a trend of Roasters for this year so we should be able to display some good examples of the Mk3.  Sean was telling us all about the restoration work he has done on his Roadster – he has spent a lot time and effort on it and it is ready to go in for a full re-spray in time for the season ahead.  I have spent the winter months improving and detailing our Roadster for the coming season too.