After around 10 months of planning, the day arrived for the Club’s National Day at Hatton Country World near Warwick and again we had a successful event.  Unfortunately, unlike last year, the weather didn’t play ball and we had a mixture of sunshine and showers, but that didn’t deter over 120 cars – not only from our own Club, but also from the International MR2 Owners Club, MR2 Owners Club, Mk1 Register, Mk1 Club and the MR2 Roadster Owners Club.

Toyota GB again provided the Club with more great support for the event, providing a  GT86 for us to use in the gymkhana and some Toyota / Gazoo Racing memorabilia to use for the NSPCC charity fundraising, along with a photographer for the day and pre- and post- event advertising.

We had the usual Concours and Show ‘n’ Shine show classes, along with a class specifically for Modified cars and a Daily Driver class for members who look after their cars but use them on a regular basis.  All classes were well subscribed, which was great to see.  We also had the usual Best in Show trophy.

Judging was again carried out by David Crouch from Toyota GB, aided by Patrick Mortell from Rogue Motorsport.  Prizes for all of the above classes were sponsored once again by Auto Glym and presented by David Crouch.

The winners were as follows :

Along with the above, we also decided that it would be a good opportunity to support another charity and give something back.  This year we chose to support the NSPCC and raised £249 on the day with a raffle of the Toyota goodies and the gymkhana competition. 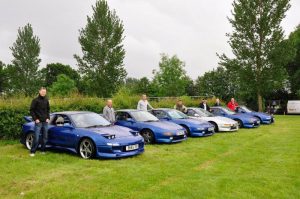 As it was also the 21st Birthday of the Mk2 10th Anniversary Special, we tried to get as many as possible to attend.  In the end we had 6 cars in attendance – 5 in Caribbean Blue and 1 in Lucerne Silver.

We also had a couple of MR2 Championship race cars on display, kindly provided by Rogue Motorsport, and trade support from MR2 Ben.

So can I please take this opportunity to thank the following:

Also can I thank the people who helped me organise this event, not only on the day but also on the run up to the event:

… and anyone else who I have failed to mention!

So are we planning to do it all again………..?  YES WE ARE! We have provisionally booked Hatton again for 3 June 2018, so please watch this space for more details of the 2018 event.