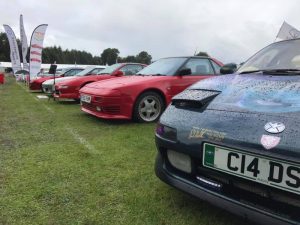 The 30th Anniversary bash at Tatton Park will certainly be one to remember, with 2,000 classic cars there appeared to be only a few that were put off by the inclement weather, with 90 classic car clubs in attendance and a massive array of different cars on show.

Once again the Dream Cars Pavilion, dedicated to modern performance cars, was a super attraction and also included a 1964 Ferrari 250 GT, a 1964 Aston Martin DB5, which was one of the cars used in the filming of ‘Skyfall’, and a 1992 Jaguar XJ220 for the classic fans to enjoy.

If there is one thing you can rely on, it is that our Club members will still turn up as promised even though the weather forecast was atrocious for the weekend.  Catherine, Dave, Shirley and I arrived on Friday to set up the stand.  We spent 3 hours on the stand, setting up the shelter and bunting and cleaning up the cars as the drive into the grounds was flooded!  We then made our way to the Swan Hotel to book in for the weekend.  Our evening with Dale and Scarlett, Mike and Phyl and the four of us was very enjoyable. 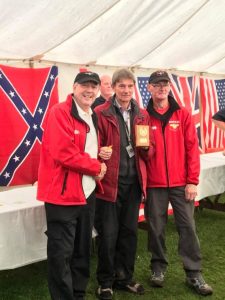 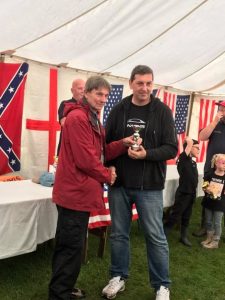 Saturday dawned and it was again a very wet morning.  We arrived on the plot in plenty of time to manoeuvre our cars for the best display, totalling 13.  It poured with rain and we spent most of the day sheltering from the weather!  In between the heaviest downpours all the members rallied and dried the cars off (many times!) and we were well rewarded by being chosen as 3rd place in Best Club Stand, just being pipped at the post by Mercedes and Rolls Royce.  Ian Howe was also awarded 2nd place in Best Japanese Classic, with his stunning Mk1, only to be beaten by a 1978 Datsun 120Y which took 1st place.  Dripping wet but not discouraged, we all left hoping that Sunday would be a drier and busier day.  We were joined in the evening by an extra two, Jean and Sky, and we had an enjoyable meal and discussion about the day amongst other things.  Dale, Scarlett, Jean and Sky all left to find their way back to the camping area in the pitch blackness of the evening!

When we arrived on Sunday the parkland was so churned up that the driveways were taped off and there were only a limited number of ways in use.  We managed to keep our stand together, as I helped with the marshalling of the incoming cars, but others were not as fortunate and were directed to park their cars on different stands and areas.  We had a change to the layout with 3 additional cars today, but the day was brighter and a lot more general public ventured out to the event, with a lot of interest shown in our cars.

A big thank you to you all for once again making this a very successful event, for the 6th year in a row. 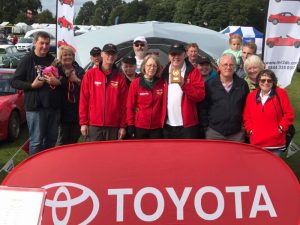